While growing gwinegrapes in Southern California, we have first hand experience that heat waves can cause major crop losses. Last year's period 0f extreme weather caused direct yield loss to our vineyards, and avocado growers feel the effect from the 2018 hot spell in 2019.

In June 2016 a heat wave, and resulting yield loss, caught most of us off guard, as this never happened before. With a similar heat wave event happening last year, chances are that sooner-or-later we will see this as the new normal. 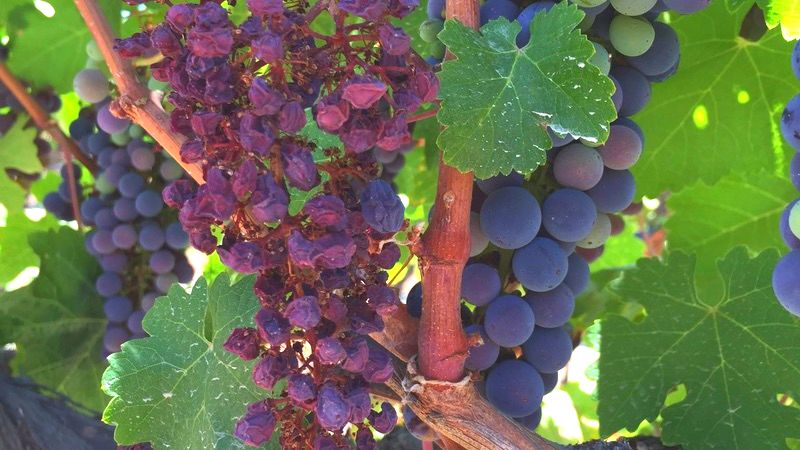 Extreme temperatures can cause irreversible damage to plant tissue. This appears in grape vines as clusters that dried out seemingly random (picture above). Anecdotal information from growers learns that most heat-related yield loss occurred in vineyards that were under a moderate to high irrigation water deficiency, often in combination with reduced leaf canopy size. Vineyards with sprawling canopies and low water stress had the least amount of yield loss.

Crops can get through a hot period by cooling through transpiration and shading the fruit. Assuming sufficient irrigation water is available, stressing your vines with a heatwave underway is never a good idea, adding even more irrigation will not increase cooling effect by transpiration. Transpiration rate will already be running at max capacity in dry air. Soil moisture sensors can confirm that there is sufficient water in the soil.

Leaving a larger canopy area is a good practice giving your vines a fighting change to get through a period of extreme temperatures without major yield loss.

R
Reinier is the author of this solution article.

Did you find it helpful? Yes No

Send feedback
Sorry we couldn't be helpful. Help us improve this article with your feedback.